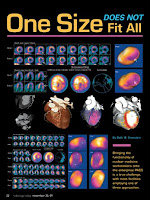 “What makes Thinking Systems’ ThinkingPACS different from other PACS is that our product provides comprehensive PACS/RIS solutions for nuclear medicine/molecular imaging in addition to general radiology and cardiology,” Wang says.
ThinkingPACS has several functions designed for molecular imaging, including the ability to communicate with any vendor’s modality devices, either through DICOM or proprietary communication protocols, and to receive, retrieve, and send all image types in true DICOM or proprietary formats without losing any vendor-specific information. “With ThinkingPACS, you can communicate bidirectionally with other imaging devices in the enterprise and ensure that the data integrity and vendor-specific information are preserved,” Wang says. With this nuclear medicine-friendly PACS, physicians are able to do PET/CT fusion, SPECT/CT fusion, nuclear cardiology processing and quantifications, and general nuclear medicine view, processing, and quantifications, he adds. Clinical solutions are available enterprisewide through either thick-client workstations or Web-based thin-client approaches.
The disadvantage to this solution is obviously cost. “If an existing PACS is to be replaced by a PACS with comprehensive solutions for nuclear medicine/molecular imaging, such as ThinkingPACS, then there is an obvious cost associated with it,” Wang says. The facility would have to decide whether the cost is justified, which could depend on how many nuclear medicine studies it does per day. Facilities that specialize in cancer may have a higher volume of PET and other nuclear medicine studies.
While Thinking Systems was founded specifically to address PACS issues with nuclear medicine images, other companies have taken steps to make their PACS offerings more compatible with the demands of nuclear medicine.
Christine Cooper, MS, CNMT, RT(n), director of radiology and cardiology/neurology at Griffin Hospital in Derby, Conn., chose a module by CoActiv Medical Business Solutions to integrate its nuclear medicine studies with its CoActiv PACS. The hospital, which has 26 radiologists, does about 80,000 imaging studies per year, of which nuclear medicine is a relatively small portion, or about 3,600 exams.
Cooper explains her choice: “My goal was to have all my imaging data in one place, and we’ve accomplished that goal. If I had a separate PACS just for nuclear medicine, it would be another server to manage, and I want all my data on one server.” However, she says, “Traditionally, once the nuclear medicine data is archived on the PACS, it can no longer be manipulated, and only the data that is not proprietary goes over to the PACS. Physicians can look at the images but not the actual full analysis.”
Still, Cooper finds that the system works well for their needs. “From a labor perspective, it creates a more efficient workflow when you have a central repository. You can hit a button and everything goes to a PACS. CoActiv also offers more advanced options for viewing nuclear medicine studies that allows for an interactive platform, which can solve both issues,” she says.
Rasu Shrestha, MD, medical director for imaging informatics at the University of Pittsburgh Medical Center, which has had a Philips iSite nuclear medicine and PACS solution for roughly five years, says it was the best choice for his center that includes 20 hospitals and 30 imaging centers performing more than 2 million imaging studies each year. It has not added the Thinking Systems plug-in to its iSite system.
The system alone has some limitations for nuclear medicine, according to Shrestha. “We can’t do everything,” he says. “There are some advanced features available via plug-ins for the nuclear medicine studies that we don’t have, but it’s advantageous to have the one system for reading the nuclear medicine and other imaging studies. It’s more patient centric and drives the workflow.”
Since mid-July, Carmichael Imaging in Montgomery, Ala., which does about 16 to 20 PET scans, 10 to 12 MRIs, and about 30 CTs per day, has utilized Siemens’ syngo TrueD, a whole-body imaging solution, on its PACS system so it can read any study from anywhere, says Patrick Rucker, MD, one of its three radiologists. The system registers data sets obtained using PET/CT, SPECT/CT, CT, and MR, allowing exams of patients scanned at different times—before and after therapy, for instance—to be compared.
Rucker says that previously the center, specializing in oncology, had separate workstations for its PET scanners. “It was good, but it wasn’t as efficient as it is now,” Rucker says. “Before, if you needed to look at a study that involved a PET scan and a CT, you would have to go back and forth between the two different workstations. I would have to either stop what I was doing and call the technician and say, ‘Please send the study to me,’ or I would have to find the old study myself and send it to my Siemens workstation and wait for the study to come over. With the new system, it’s just drop and drag and in 15 seconds, it’s loaded. It really has cut down on wasted time.”
Being able to look at all the images on the same workstation improves not only efficiency but also accuracy, Rucker says. “The less you look at an image, the more time it takes you. You lose your train of thought and could miss important details. With this system and its ability to fuse the images from the different modalities, my eyes never leave what I’m looking at and that makes it more accurate.”
The one disadvantage to adopting the new system, Rucker says, “is that you have to replace your PACS and go through the update process, but I had no interaction with that,” he says.
- -
Beth W. Orenstein is a freelance medical writer based in Northampton, Pa.  She is a regular contributor to Radiology Today.

Promote your Page too